Getting a french “Titre De Sejour!” 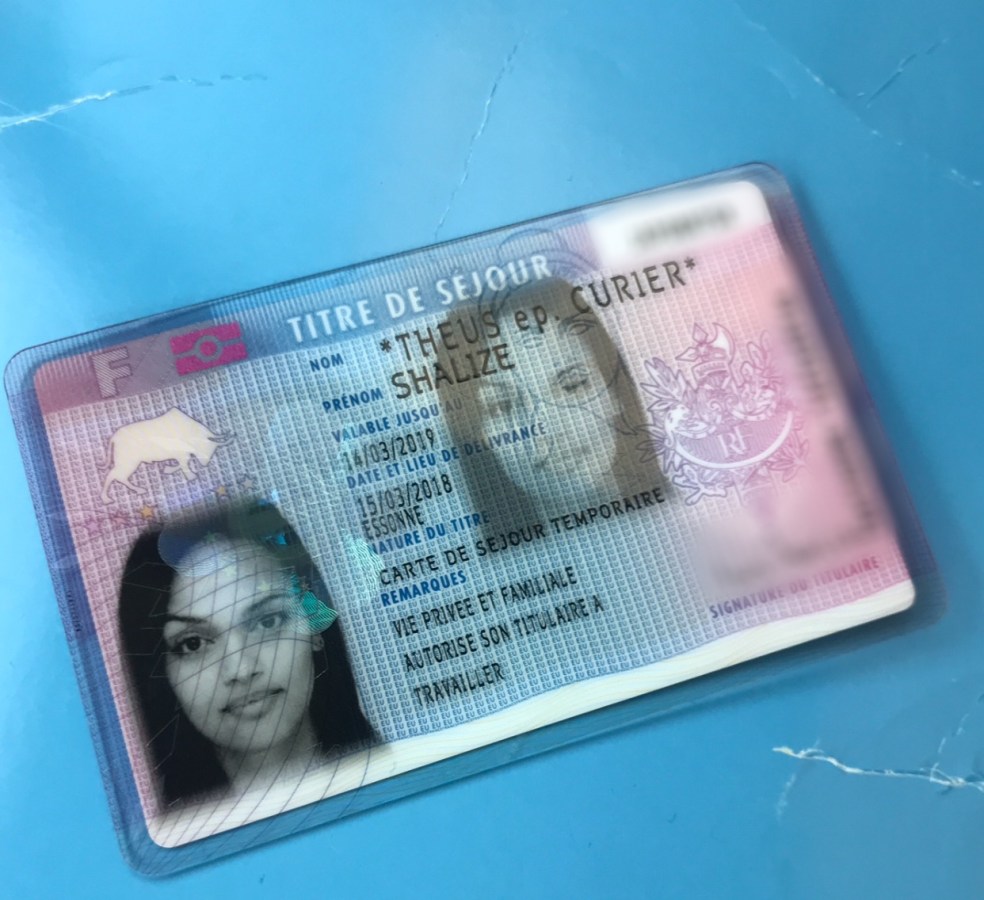 As I’ve mentioned before, transitioning to a new country is not an easy task. Besides the fact that you must get accustomed to entire an new lifestyle, culture and all that comes with it.. there is an intense paper work process that you must endure in order to have rights to stay in France permanently. Although this post is strictly related to my experience applying for the titre de sejour in France it is possible that other countries or when applying for other visas..they might have similar policies and steps to getting a residence permit/Carte de sejour as well!

I’ve gotten this question a lot.. most people think since my husband is french that I am automatically awarded the rights to live, work and stay here in France but that is far from the truth. While being married to a french man does make the process a bit easier,  it doesn’t stop me from having to do the same steps as everyone else transitioning to France from another country and to be honest it’s not fun.. AT ALL!

What is a carte de sejour?

It is a document issued by the French prefectures that authorizes an alien to reside on French territory without the cover of a visa:

Non-French, non-EU and non-EEA nationals that have family ties with a French resident can apply for this type of residence permit, under some certain conditions. The card is valid for a year and is renewable, and allows its holder to work.

Coming to France in March 2017, I had a one year long stay visitor visa…

about 3 months before the expire date I began collecting the necessary paper work to apply for my carte de sejour.

My first advice is to gather all of your paperwork as soon as possible, but the tricky part to this is, is that a few of the documents need to be recent so be sure to pay close attention to the list that follows.

Once you have all the proper paper work, make sure you triple check! You really don’t want to be unprepared.. you’ll understand why soon. As soon as you have everything all sorted out you can begin your application process two months before your visa will expire.

In addition to the list above.. I recommend bringing 2 to 3 copies of each document when you go to the prefecture. They will expect this.

My experience: The boring part…

Just a little disclaimer: this is my personal experience at the Palaiseau Prefecture near Paris. Every prefecture is different so I would still recommend to do your own research on the prefecture you must go to.

The prefecture is open from 9-4pm as stated on the internet and on the doors of the prefecture. HOWEVER.. The time allotted to apply for any type of visas/cards is solely from 9am until 12. It is not open Wednesday’s and there are no appointments allowed any day of the week.

I went to the prefecture a total of 4 times.. the first time my husband and I went having no idea what we were in for, we knew the prefecture opened at 9am so we showed up around 9:30 grabbed a ticket, and sat and waited for about 3 and a half hours until we realized they stopped taking people regarding our matter at 12.. no one told us anything.

We quickly learned that if I was going to be able to be seen before 12pm I was going to need to arrive earlier in order to grab an early ticket. The next time I went, I arrived at the prefecture at about 7am hoping that this would be early enough, I was wrong.. when I arrived at 7am there was already a LONG line.. I ended up being around number 70 and by the time they called number 50 it was already 12pm. Another wasted day!

I finally got lucky, I arrived at the prefecture at around 4am..yes 4am! and again there were already about 10 people in line. I was number 17.. after waiting for 4 hours outside in the cold (they really don’t let you in until it’s exactly 9:00) I was called to the window at about 10:15am.

Once I got to the window, I handed in all my necessary paperwork and was   then given a second ticket so I could sit down with someone at a separate window who would help me get the process started. I could only hope that again, I would be called by 12pm. PHEW

When sitting down with the woman at the window she was not the friendliest and asked A LOT of questions.. also be mindful, they will speak to you in french so try your best to do so as well. This specific day I ended up going alone to the prefecture because my husband wasn’t available.

Once the appointment was completed it seemed as if everything was in order and I was all set. Unfortunately due to my husband not being there there was still a form missing that needed his signature. The woman then advised me to return back to the prefecture with him to finish the process and the singing of papers. No appointment. 🙁

The following week, I returned to the prefecture with my husband at 4am..

After a grueling 4 hours of taking turns waiting outside in the cold we were in and out of the prefecture with my rècèpissè in hand!

My guess is that prefectures in smaller cities are a little easier to deal with!

The rècèpissè is what you are given once you have finished and successfully applied for your carte de sejour. You can use the rècèpissè to travel, work and do anything a carte de sejour allows you to do while waiting for your official card to arrive. Be careful, it is only valid for 3 months. If you still have not received your card within the 3 months you must apply for another rècèpissè.

Getting your official Carte de Sejour:

It turns out my card was available 1 month after leaving the prefecture but I had no idea. I didn’t receive mail or phone call regarding its arrival. It wasn’t until I realized that my rècèpissè was no longer valid that I got worried and called the prefecture to ask when I should expect it.. they politely told me “oh it’s been here for 5 months” ok.. thanks!

After this it got a bit easier..

Depending on if you received mail or a phone call letting you know your official Carte is ready for pick up you can go to your prefecture at your scheduled time or just walk in. I recommend calling your prefecture first to verify what are the available times to come for pick up without an appointment. Make sure you bring your rècèpissè with you as well as your 269 euros worth of stamps AND any other documents and identification..just in case!

Voila ~ There it is!

Here is the official website where you can find some more information if needed!

My husband and I had a hard time figuring everything out on our own, It’s really hard to get answers especially with everyones case being different.

Feel free to leave a comment below if you have any questions! I’d love to try to help anyone in a similar situation!

As always, thanks for reading!

Tips on bringing your pet abroad!

If you’re wondering if Belgium really has the best chocolate and waffles... the answer is YES! 😋🍫🧇🇧🇪 Bruges day trip vlog is now live on my channel! Link in bio 💋
Bonjour Bruges 🇧🇪 Currently working on putting together a short day trip vlog of this beautiful city! Can’t wait to share it with you guys!!
Heureuse là où se trouve le soleil ☀️ @fableticseu #fableticspartner #teamfabletics #fableticsfr
Rare full body photo in Bruges 🇧🇪 We were taking a selfie and a nice man asked us if he could take a photo of us. We were so thankful because we hate bothering people to ask 🙈 and I’m also always so disappointed that we never have anything but selfies when we travel. We were actually cracking up in this photo because he took his role SO seriously.. Capturing multiple angles & changing positions that seemed completely off lol. We had no faith that we would get a good picture 😂 but to our surprise he delivered!
Thank you to @letsmoveabroad for sharing my move abroad story in such a beautiful way. I hope that the chance I took on love can inspire you guys to lead life with love, make love a priority, and trust that a happy and fulfilling life built on love is absolutely possible. No matter where life or love takes you, everything in life will always fall into place as it should. You do not have to do the same thing or take the same path everyone else does! To read more about our love story and how I moved from the US to France check out @letsmoveabroad ✨ Along with my story, there are a bunch of other expat stories and resources available for any of you looking to make the big jump as well! ✈️🌎✈️
G and I were laughing because we realized how adult we were this weekend. Waking up early on a Sunday morning to go to the market to get fresh veggies for dinner. It’s a world of a difference from our previous weekend activities (in our early 20s) 😂 but I like this version much better ☀️🥗🥦🥕🇫🇷

Try on new spring/summer clothes with me! * French Mother in law helps me decide which dress to wear
YouTube Video UCY4OZgMu0COFfReo-f6r0Qg_usIqD52WCcI

Tips on bringing your pet abroad! How I brought my dog from the US to France // *American in France
YouTube Video UCY4OZgMu0COFfReo-f6r0Qg_nB4PZ0pdKEM