Taking the French DELF A2 exam: My Experience 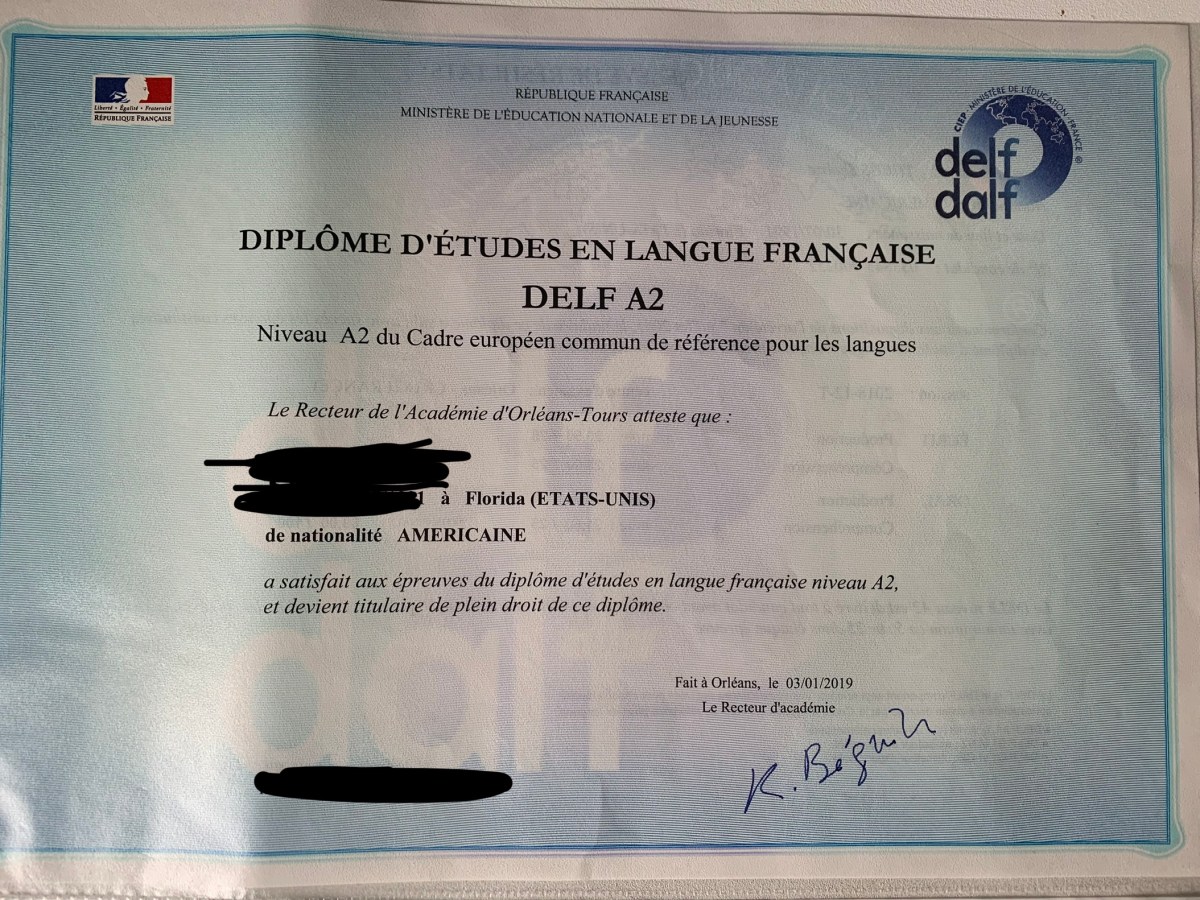 and if you’ve been here before, welcome back!

What is a DELF Exam?

The DELF is a diploma awarded by the French Ministry of Education to prove the French-language skills of non-French candidates.

This exam was included at the end of my Niveau A2 French language course here in France.

Just to be clear… if it wasn’t for this course I would have been no where near prepared for this exam. I came to France knowing absolutely no French at all, after learning a bit from my husband this course really brought me to the next level. It wasn’t until the course was over that I saw a significant difference in my level and felt prepared and ready to do be tested.

If you’d like to know more about my experience in the Niveau A2 french classes click here: Learning French: My niveau A2 experience

So, after learning, studying, preparing and freaking out a little bit. As soon as the 2 month course (Niveau A2) was complete it was time to take the exam!

There are a number of different types of exams but the specific one that I took was the “DELF Tout Public A2” exam.

The exam consists of 4 different sections:

So, as you can see the exam is in 4 different parts.

For the main part of the exam which is the Reading/Listening and Writing (which is all done together)  I was given a time to be at my testing facility along with everyone else who was being tested that day.

Once it was time to begin they called out everyones name and told us all which room we were going to be in.

After entering the room, it was go time! All of the instructions are given in french so naturally… straight into French mode I went!

We had the opportunity to work on a few practice tests in the french course that were pretty much identical to the real version so to be honest it wasn’t anything shockingly different. So I highly recommend finding a way to get some real practice in before the test so its not such a shock.

What I struggled with…

I wasn’t really expecting this considering that I was doing so well in this area throughout the entire course but.. The listening section was hard for me…

We had to listen to a variety of different recordings and then answer some questions/ fill in the blanks regarding the topics and contents of the recordings.

With the added pressure of only being able to listen to each one twice, and being a little bit nervous.. I pretty much heard “gjadngkjadngadjnga” I was so frustrated and I’m not really sure how I could’ve prepared more for that section but I guess that best thing that you can do is try not to over think it and psych yourself out like I did..

The remaining sections were pretty straight forward. Exactly what I expected and no surprises!

The speaking section….
Once I re- entered the facility for the final part of the test, I was able to choose 2 different topics from a pile.
One being the subject for the guided conversation and the other being the subject for the role play.
My first subject was sports and the second for role play was a scenario where I forgot my purse in the train- I had to report it stolen.. ALL IN FRENCH.
I panicked a little, and I was pretty nervous. So I left feeling pretty uneasy, especially because the examiner was a little cold and showed no type of emotion.
but….. surprisingly after thinking I completely BOMBED it.
Here are my results:

As you can see in the chart at the top you need a 50/100 overall total (with every component added all together) in order to pass, so in reality it is REALLY hard to fail.
As long as you have more than enough practice in each section and feel confident and stress free the day of the exam, you can do it!
I’m proud to say that I officially have an A2 French speaking level!
So basically… I KNOW FRENCH!

Kinda..
Never in my life would I have imagined I would be learning a completely different language at this point in my life.
Learning french in the beginning felt completely IMPOSSIBLE- It is difficult learning a language at an older age and I am still a complete work in progress but it’s been a good challenge with an even better reward.
Still waiting for the moment that I’m officially fluent… but ya know, that’ll take some more time. 🙂
Feel free to leave a comment down below if you have any additional questions regarding the exam!
As always, thanks for reading!
xx Shalize

Visiting Tokyo, Japan: Where we ate!